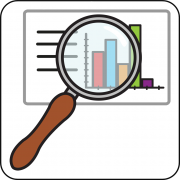 LINK TO THE PUBLICATION

Faculty of Psychology, University of Murcia

Iconicity and ease of learning of ARASAAC pictographic symbols

In previous research by Bertola (2017) and Cabello and Bertola (2015) it was found that the ARASAAC pictograms had a high index of iconicity and, in fact, were more transparent than those of the SPC and Bliss sets. This finding was also replicated in the adult population, the child population with typical development, and the child population diagnosed with autism spectrum disorder.

The importance of high iconicity lies in its relationship with greater ease of learning. However, in these studies it was not possible to verify whether the ARASAAC symbols were actually easier to learn, and therefore the general objective of this work was the ease of learning the set of the ARASAAC, SPC and Bliss pictographic symbols in minors with developmental disorders.

The study involved 24 minor users of the Center for Child Development and Early Care (CDIAT) of Puerto Lumbreras (Murcia), diagnosed with language delay, specific language disorder, and autism spectrum disorder. The children were randomly assigned to one of three experimental groups according to the set of pictograms used: ARASAAC, SPC and Bliss.

As in the other works on ARASAAC, a total of 30 words were selected corresponding to the grammatical categories of nouns, verbs and adjectives. For each of them, a group of 4 pictograms (one corresponding to the target word and three distractors) was presented on a computer, so that the experimenter presented the word orally and the children had to select the pictogram that corresponded to it. For example, in the example of the figure, “moon” would be the correct pictogram while “cat”, “telephone” and “sleep” would be the distractors.

The task was organized into four different sessions:

The following graph shows the percentage of successes of the three groups (ARASAAC, SPC and Bliss) in the initial evaluation, training, and follow-up sessions. 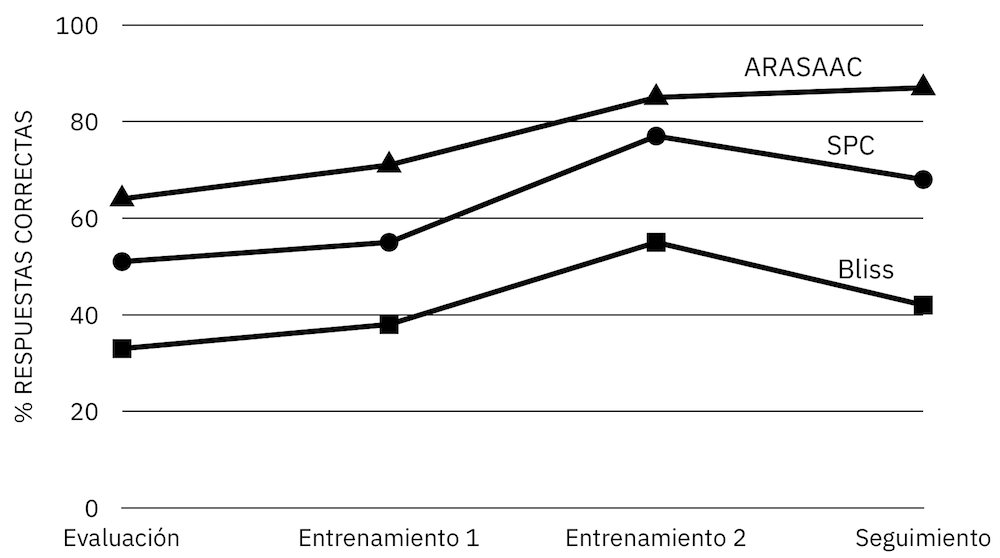 In the initial evaluation, ARASAAC achieved the best results, which is interpreted as another indication of the greater iconicity of its pictograms. During the training, the ARASAAC group continued to show a significantly higher percentage of successes than the SPC and, although the difference was more evident after the first session and was equal with the SPC group after the second. Regarding follow-up, only the ARASAAC and SPC groups maintained learning after one week, and again ARASAAC achieved the best results.

ARASAAC was the system that showed greater iconicity and also greater ease of learning at all times, followed by SPC and finally Bliss. In addition, it showed a significant increase in successes already after the first training session, while the other sets needed two sessions to produce this improvement.

Therefore, this work provides positive data on the acquisition of the pictographic symbols of ARASAAC as opposed to the other well-established systems such as SPC and Bliss, and continues to accumulate evidence in favor of their quality and validity.